Danny Sullivan of Search Engine Land brought this extension of Google search results to my attention via his weekly podcast. Benign as it may currently seem, industry professionals the world round have pricked up their ears to the news, confident that it is the migration of the search algorithm as we know it today (PageRank) to a social ranking system, dependent on users to determine end-results. 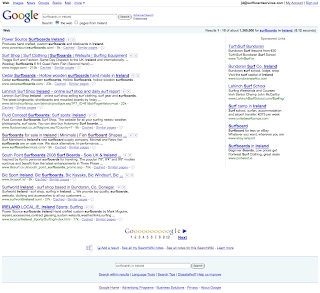 In a dramatic shift towards a community-centric search algorithm, Google has launched SearchWiki. The screengrab above highlight Surf Merchant’s listing at position 6 in Google.ie for the search “surfboards in Ireland”. Google’s latest innovation is the addition of a promotion toggle arrow to the right of the listing, permitting logged-in Google account searchers raise or delete their displayed listings for given queries. This customisation of results is unique to the account user, and will not display in their preferred format universally for all Google Search users (if that were so, organic search engine optimisation would become a tit-for-tat between search query competitors pressing the toggle button!). Further to this priority listing mechanic, Google has provided users the functionality to comment on listings. As per the below shots, once we have signalled our intent to better position a certain result in the search listings, Google enables the searcher to tag that listing (sound familiar?): 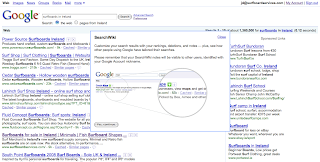 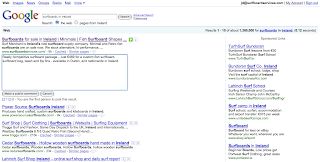 Return to the Google search results for the same query, low and behold, the listings order has been altered and the users’ comments displayed: 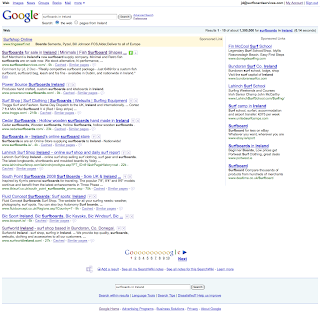 What’s more, as a logged-in Google account user, it is possible to display all comments made for the listings given:

Back in July there was massive speculation about Digg being bought out by Google. Digg, a social bookmarking platform, allows members rate digital media, share it with friends and the Digg public at large. The concept is applied hugely successfully too with e-commerce sites like e-bay and amazon, where customers review articles and products, which in turn receive greater exposure the better the sentiment. Travel sites such as Trip Advisor and Boo.com similarly have empowered those with the most experience, the visitor, to determine elevation of content upon their portals.

Google eventually refrained from investing directly in Digg. Perhaps this is the alternative? Why buy a social network if you can create one yourself? Google has enormous wealth in traffic, and user loyalty. Google’s ambition is to retain traffic for longer periods, across their proprietary network, from blogspot to youTube and Google Apps. The more content that sits on Google-owned frameworks, the more advertising opportunity. Why then send users off to Digg to rate what they come across online, when Google can provide the infrastructure to socially bookmark the web, and keep users coming back for more. It’s a daunting prospect, but Google’s policy is clearly to serve the web in its’ many formats, and advertise on the side. In releasing SearchWiki, Google is entering the social bookmark sphere, and I see no reason for them not to leverage their incredible traffic reserves. If I was Digg, I’d be worried.

As for SEO, we’re told for the meantime that user-generated result customisation remains simply an added-value tool for the user in question. However, as Danny Sullivan and Peter Stewart infer, over time as user-rating takes hold, the logical step for Google to take is to factor SearchWiki into the rank algorithm. Without doubt, the algorithm has been tweaked over the past 24 months to favour social media. My back-link research often highlights Google’s awareness to specialist social search engines like BoardReader. Google acknowledges that relevancy is best measured by the crowd, so they have looked to links from blogs, forums and social bookmarking sites as qualified website citation, and thereby weighted their listings to sites that generate market conversation. All that is happening now is that Google is bringing the chatter in-house, where they can better monitor and filter it.

A key success variable will be sorting out the garble from the eloquent, and negative review from thumbs up. Google is positioning themselves strongly by controlling the discussion exchange. Albeit they are borrowing a system already employed, I will not be surprised if they quickly supersede what’s already out there and deliver yet better matched results to our needs.

How Google Is Diluting Diversity